The following dog story will be appreciated by all you dog lovers out there.  Contrary to so many unhappy stories about dogs on the Greek islands, this one is hilarious. 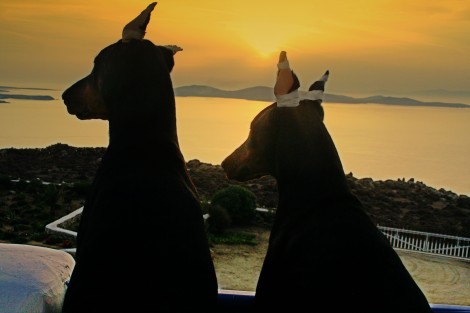 If you’ve read my earliest blogs about my two wonderful dobies, Zeus and Athena, then you know that they are quite the travelers.   They love their time in Mykonos and hopefully will make one last trip next year to stay for good.  Ok, enough preamble.  Here’s the story.

Our home is situated high on a cliff overlooking the Aegean Sea.  There is a very steep road that goes part of the way down towards the sea, but the rest is a good hike on foot.  Someone told me that there was a tiny cove and beach below us that was accessible if I cared to search for it.   I decided one day that Zeus, Athena and I would become daring explorers and begin our hike.

Wearing a bikini under my clothing and packing a towel and plenty of water, we began our adventure.  Both of my buddies were on leash until we came to the end of the road and began working our way down the sloping cliff.  Once I freed them, they joyously  began leading the way.  They could hear the sea below and wanted to reach it.

They both came to an abrupt stop at a fairly steep drop of about 12 feet and a lovely tiny beach at the bottom.  To get to it meant climbing down over the rocks.  Within seconds both Zeus and Athen charged straight on.   Without thinking about how we would get back up, I followed my kids, laid a towel on the beach and prepared to swim.  Both dogs were prancing through the water and playing with each other.  Neither had ever swam before.

I then decided it was time to take a swim. The water was delicious so I began heading out away from the beach.  After a minute of swimming outward, I decided to rejoin my dobies on shore. As I turned around, what do I see but 4 very wide eyes and 8 paws with claws frantically swimming toward me!  Now remember that neither Zeus or Athena had ever swam before.  They just wanted to be with me and natural instinct took over.

All I could think of was that I would get clawed to death and they night drown!  I swam around them and headed for shore praying that they would do the same.  Of course they followed, shook themselves off and all seemed well.

Within seconds both Zeus and Athena started barking at the sea.  I couldn’t understand their problem.   Staring in the direction that they were looking, what do I see?  A large circular black blob rising out of the water, and a black body slowly showing itself above the surface.   I then began to realize that this was a scuba diver in old fashioned  scuba gear slowly coming towards us on the beach.   Both dogs continued barking.  I called to them to stop.   Whomever the diver was, decided that perhaps walking up to two barking doberman guarding a blonde in a bikini on a deserted beach (with what appeared to be no way out), was not a good idea.   As silently as he came, he just turned around and walked slowly back into the sea.    To this day I often wonder how he tells his side of the story.

We packed up and I then had my next panic of the day.  How was I getting them up the cliff?  I shouldn’t have worried.  They are very resourceful and didn’t hesitate to start mountain climbing upward. They pulled themselves up!  Of course I was right behind them in case of a slip.

Later I realized the folly of my trip.  The open cliff side is also where the local goat herder often lets his goats graze.  He is known to carry a rifle and not be dog friendly.  He would never know that my dobie duo are actually total sweethearts.   Thankfully there was no meeting between goat herder, or goats…..just sea monsters!

This site uses Akismet to reduce spam. Learn how your comment data is processed.